We hope you have a spooky and fun time with this year’s Halloween.

The first month of Q3 started strong with many quality partnerships in the GameFi segment to create a strong build-up towards our GameFi Hub Iron Sail launch.
During this period, KardiaChain had made fundamental decisions in restructuring and set new focus on the blockchain mass adoption of traditional businesses, while our new entity Whydah will be in charge of the GameFi segment for the best of blockchain gaming development on KardiaChain’s network. And from the open sea of Iron Sail, there was Mytheria, the first-ever Create-to-Earn blockchain game with innovative incentives and gameplay for everyone to explore.

KardiaChain has also constantly updated our products and upcoming line-up to ensure the healthiest experience for our beloved KAI community, strengthening our position as the definitive Vietnamese traditional blockchain infrastructure.

Let’s have a look at our accomplishments in October.

KardiaChain’s recent gaming expansion to be ahead of the GameFi trend has captured the attention of many quality game studios. From today on, our ecosystem welcomes another renowned developer, Divmob. We are thrilled to accelerate blockchain mass adoption via gaming, an entertaining and educational experience.

From our point of view, the issue of the blockchain learning curve can be overcome easily by the gaming approach. Users can subsequently learn about the process of creating values, staking, trading, bidding of tokens and NFTs through how blockchain games simplify these processes. With a reputation for creating educational content and games, Divmob has a vision to bring top-quality yet casual games to the mass. Powered by KardiaChain technology, Divmob’s blockchainised games aim to strike a perfect balance between entertainment and investment.

KardiaChain's recent gaming expansion to be ahead of the GameFi trend has captured the attention of many quality game studios. From today on, our ecosystem welcomes another renowned developer, Divmob. We are thrilled to accelerate blockchain mass adoption via gaming, an entertaining and educational experience.

Following the rapid expansion of KardiaChain in the blockchain game industry, the team continues to pack a massive pipeline of projects for the next exploding movement. Joining forces with a world-class developer – Hiker Games is our loud and clear message for our quality-first approach in GameFi.

The recent trend in GameFi hastens developers to prioritise time-to-market over other aspects. As a result, most blockchain games today are with casual gameplay or simple click-to-earn mechanisms. The thirst of hardcore gamers in blockchain space is yet to be quenched. The arrival of Hiker Games as one of our leading studios will capture the attention of the mainstream gaming community with the best of quality games and diverse genres while inheriting KardiaChain’s blockchain technology with many advantages in the market. It is important that gamers should approach GameFi for the entertainment aspect and true ownership of in-game values before the benefit of earning.

KardiaChain is truly enthusiastic about collaborating with major players in the entertainment industry. We believe the influence of quality viewership will subconsciously help everyone to realise the benefits of blockchain applications in day-to-day activities, which is crucial for our mass adoption mission.

In recent times, we have partnered with several prominent companies in the entertainment industry, such as FAM Central to tokenize the movie production, and Yeah1 TV to exclusively distribute content using blockchain technology. And today, by partnering with us, MCV Groups is delighted to pave the way to mainstream blockchain on media.

Since the launch of KAIDEX 4 months ago, the support of all KAI Believers has been overwhelming. It is the fuel for our team to push the limit even further to develop the best DEX with CEX experience for each and every one of our users.

In order to ensure the healthiest trading environment for our beloved KAI community, we will conduct a quarterly analysis and review of the digital assets on KAIDEX. This will certainly lead to minor alterations with the digital assets, and we may potentially cease supporting some unqualified assets currently on KAIDEX.

The standards and regulations for us to decide whether we will cease to support a particular asset are as follow:

After a thorough analysis and review from the Kardia Labs, we will provide the following updates to our KAIDEX v2:

The token pairs available on KAIDEX are now separated into two different sections:

KardiaChain is going through exciting new changes to achieve our long-term vision of mass adoption. During the past two years, we have been working around the clock to establish KardiaChain as the top-of-mind blockchain solution in Vietnam. Local players of different sizes are coming to KardiaChain for both technological advancement and business model enhancement. Our public chain saw exponential growth in traffic from 0 to 1 million transactions in six months and then added another 15 million in just another three months. Our ecosystem started with an explorer, a membership app for KAI holders, and a DEX.

KardiaChain is going through exciting new changes to achieve our long-term vision of mass adoption.

Iron Sail, the undisputed gaming hub to set KardiaChain ahead of the GameFi curve

Iron Sail is “a collective effort to contribute to the development of the blockchain gaming space” incubated by KardiaChain. Iron Sail works closely with top game studios in the region to publish quality-first blockchain games, while also being a place for investors to participate in “treasure hunting” side events and receive updates on the development progress.

Iron Sail will soon work toward the open metaverse for an interconnected future for everyone to access the definitive Omni Play-To-Earn experience.

Having inherited everything from the incubator’s superior quality work and technology, Iron Sail is the concrete-hard proof of KardiaChain’s ambition to be a leader in the GameFi market. Our ultimate goal of mass adoption through entertainment is no more just a fantasy but a reachable reality. 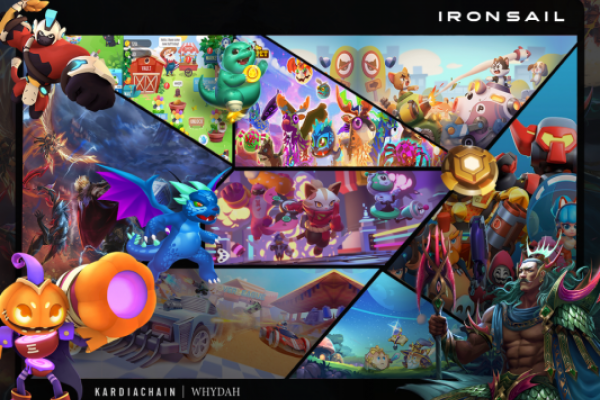 The following post was written and/or published as a collaboration between Benzinga’s in-house sponsored content team and a financial partner of Benzinga. Slowly but surely, blockchain is finding its way into the world of gaming. Every other week, a new blockchain-based game or feature is announced that shows that it is truly here to stay in the gaming sector with only more progress to be made. This union of blockchain and gaming is an understandable one as there is often an overlap between bloc

KardiaChain’s GameFi hub Iron Sail was recently revealed to the public with overwhelmingly positive reactions and $25 million funding from major ventures in the blockchain landscape. Iron Sail’s concept is a “Treasure hunting in the Seven Seas” and an open exploration of the Metaverse. With that said, many have been eager to see what the unveiling of the first area of the Open sea map would be about.

With no further adieu, let’s get everyone to set sail on the first sea, where it will be known as The Sea of Gods, to explore the first project, Mytheria – Clash of Pantheons.

Mytheria is a card game with the essence of a board game brought on a virtual platform for everyone to join in. The game’s concept is about the pantheons from many ancient civilizations and cultures across the world battling for honor and glory.

With no further adieu, let's get everyone to set sail on the first sea, where it will be known as The Sea of Gods, to explore the first project, Mytheria - Clash of Pantheons.

KAI Community AMA Recap: A Quick glance at Q3 and our vision for the rest of 2021

On September 30, We’ve conducted an AMA in Official KardiaChain English Community, The AMA was held with Huy Nguyen – CTO of KardiaChain, and Lew Tran – KardiaChains’ Head of Engineering.

The AMA session took place over the KardiaChain community on Telegram where Huy Nguyen and Lew Tran Discussed the Q3 update of KardiaChain and vision for Q4 also covered lots of interesting topics and the Future plans of  KardiaChain.

KAI Community AMA Recap: A Quick glance of Q3 and our vision for the rest of 2021 - KardiaChain Blog

Following the arrival of our new Chief executive advisor, Mr.Trung Phan, has personally written a letter to every member of the KAI Community. This letter addressed his role in the restructuring process and the new direction for KardiaChain’s strategy.

We would love to publish this letter so everyone can have a closer look at what is coming in our next chapter of this journey together.

Dear Valuable Supporters, Among the readers of this newsletter are indeed the ones who care the most about KardiaChain. Perhaps you are much earlier than me into Kardia. I want to share my vision and plan to restructure KardiaChain as I take on the role of Chief Executive Advisor. I’m a classical economist. In my […]

Congratulations KardiaChain for being among the Top 38 platforms with the most TVL on DeFiLlama.

Milestones after milestones are conquered, thanks to the support from our wonderful $KAI Community.

We have reached another huge milestone, our KardiaChain Twitter page just reached over 100,000 followers!

We wholeheartedly thank all our $KAI Believers for such incredible supports you showed us this whole time.

Let’s make the next chapter on our journey reach more new heights!

How was your experience?